What The Color Of Your Earwax Says About Your Health

What does the color of your earwax say about your body? You can learn a lot about your health from that stuff that comes out of your ears!

This type of wax usually belongs to children. As children grow older, they will produce less. It is normal and healthy for children to produce a lot more earwax than adults.

This is one of two common varieties of cerumen found in most people. It is good at lubricating the ear canal, which prevents it from becoming dry and itchy.

This is the other most common type of wax found inside your ears. This variety of cerumen is linked to a recessive gene. In turn, this color of earwax is usually seen in people who produce less body odor.

When stressed or afraid, your glands produce more wax than normal. When earwax is produced faster than your body can push it out, a wax buildup can occur. Too much earwax can cause a blockage, or even temporary hearing loss.

While scary looking, it is probably no cause for alarm. Dark earwax could be a sign of the overproduction of wax from stress as mentioned. Fats in your earwax react to oxygen. The longer the wax is in your ear canal, the more oxygen it’s exposed to, leading to a darker hue.

Older and darker earwax may have a similar appearance to blood. It could also be an indication of a ruptured ear drum. To be safe, it’s best to see a doctor immediately.

This type of earwax could be the result of a dust buildup. While unusual it is a sign of the earwax doing its job by protecting your eardrum from foreign objects. If accompanied by cracking, dry, or itchy skin inside the ear canal, it could be seborrheic eczema. A doctor can provide treatment in this case. 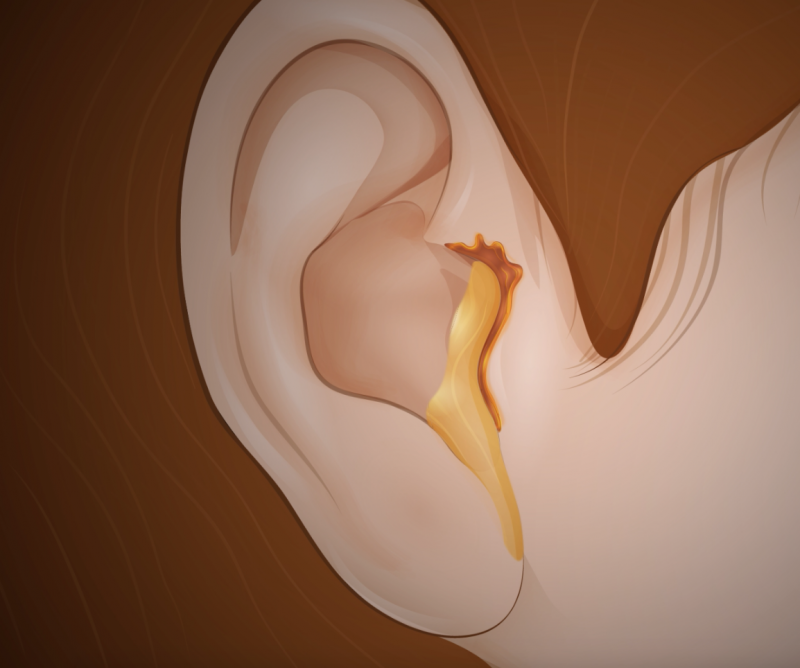 It is normal for wax to leak from the ear canal from time to time in small degrees, as this is your ear’s natural cleaning mechanism. However, large volumes of drainage with blood and pus in them is a sure sign of a ruptured or perforated ear drum. If you’ve found this information helpful please SHARE it with your friends!